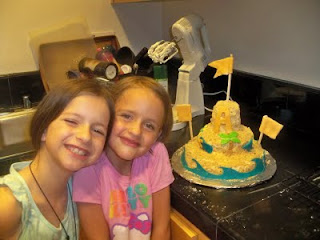 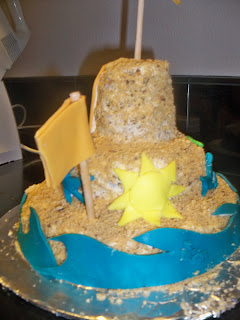 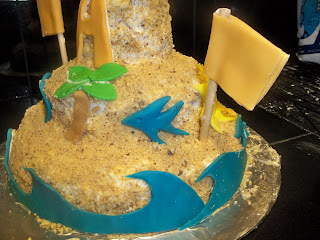 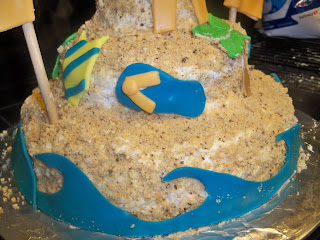 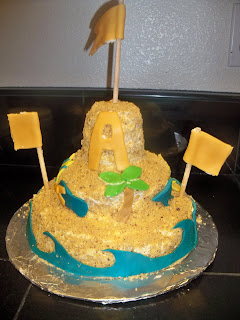 I let my kids decorate the cake for my middle child's birthday. She is having a beach Hawaiian themed party. I used vanilla sandwich cookies and cocoa puffs for the sand. The variation in color makes it look more real. I used fondant mixed with a little gum tex for the decorations and I let the kids go to town like it was playdoh. They had so much fun. I tried to make the top tier look like I used a plastic cup to make the top, since you see that so often on the beach.
Posted by Melinda B. at 8:47 PM No comments: 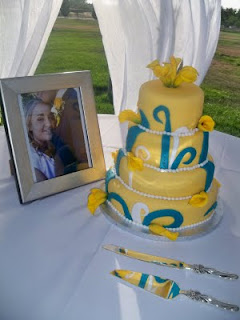 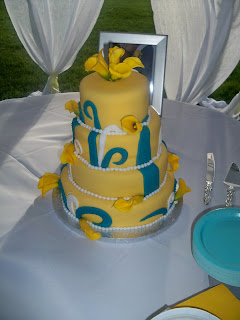 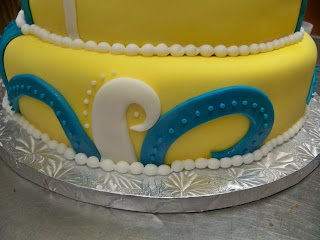 I am moving up the world folks! My first 4 tiered cake! I made this for the wedding of Carrie and Zach. They had the most charming outdoor wedding reception with paper lanterns hanging from the rafters and mason jar center pieces filled with calla lilies. This cute cake fit right in with the joyful atmosphere.
It took 10 hours to create this, which is a big improvement for me. 4 tiers and 10 hours, compared to my last wedding which took me 14 hours and was only 3 tiers. I am getting more efficient, more confident, and more knowledgeable. Cutting out 4 hours is ALOT.
My favorite part of the cake was the tiny dots I used as accents. I punched each one of these out by hand and used a paint brush to "glue" them in place. It was work, but so worth it.
Posted by Melinda B. at 8:39 PM No comments:

Yes Padawan Learner, You are learning the ways of the Force.... I mean Baker. 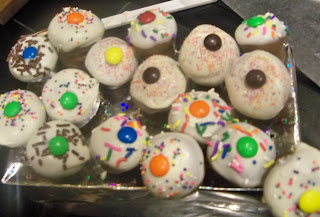 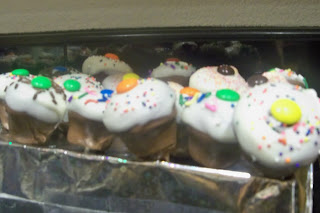 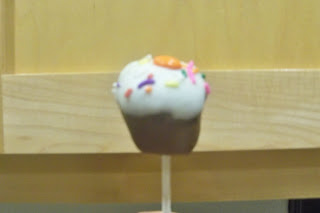 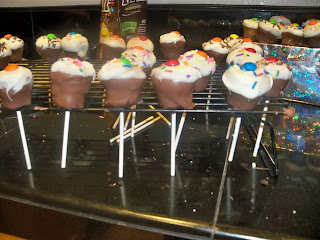 Cake Pop Attempt #2 --- as you can see --- SUCH an improvement. They actually look like mini cupcakes and the more you stare at them the more you want to ravenously start mauling them one by one. I count that as a success.
I made a few major adjustments from my last failure in the kitchen. First I only used half the can of frosting instead of the whole thing. The texture is firmer and much better for the stick, but also much more palatable. Much more like a brownie than a gooey mess of dough. I formed the cupcake shape, put in the stick, and then put them in the freezer. Very important step. Once frozen, I dipped in chocolate, dipped in white chocolate, and added sprinkles and an M&M on top.
How much would you pay for these if it was your kid's birthday party?
I am thinking $1.50 a piece or $12 for a dozen, what do you think?
Posted by Melinda B. at 3:51 PM No comments:

Update on the Cake Pops

So the party--- little did I know---- was OUTSIDE. I really didn't think any thing of this until the candy melts started melting! They were blobs falling off sticks by the time it came to serve them. What a disaster. And I am not being overly dramatic. When you try to serve something with sprinkles to a kid and they look at you and go, "No thanks." you know it's bad!
So from now on, if anyone ever asks for cake pops or cake balls I will tell them these are only for indoor temperature controlled environments.
Roll with the punches baby. Just roll.
Posted by Melinda B. at 3:38 PM No comments: 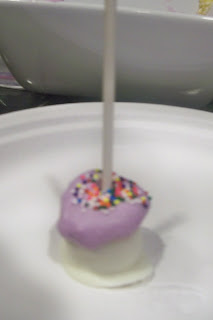 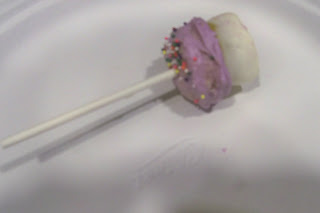 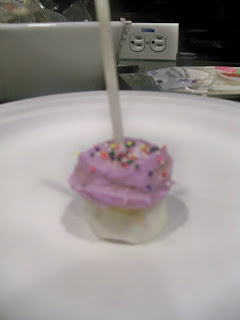 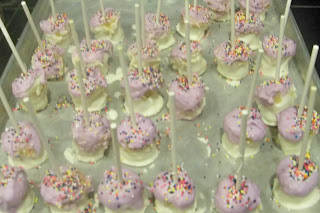 I was asked to bring in a treat for my daughter's last day of school party. This was just the excuse I was looking for so I could try cake pops. They are essentially cake balls, but slightly smaller and....you got it....on a stick.
Thank goodness this first attempt is for 8 year olds, because I wouldn't be happy giving these to anyone who paid for them. There are some people who just naturally gets things right the first time, but I am not one of those people. It might have helped had I actually found a recipe or watched some youtube videos, but you know me, just in and then test the temperature of the water.
So I rolled the balls and started to dip. Bad idea. Next time roll your balls and FREEZE them before attempting to dip. They were so soft that trying to keep my cupcake shape was an absolute joke. And then little bits of cake got into my dip and that made me very unhappy.
I also used just the right amount of dip. Next time I will add a little extra so I have a deeper amount to roll in. Sometimes you have to have excess. You just do.
Also-- I dipped the white first and then tried to put the sticks in. Duh. The chocolate melted dip hardens and then guess what... you can't put the sticks in! So I had to make my cupcakes UPSIDE DOWN! Lesson learned again. They still look cute, but now when people eat them, the ugly side will be up. Unhappy again.
The good thing is, I have an audience who be will happy just because I added sprinkles.
Posted by Melinda B. at 8:19 PM No comments: 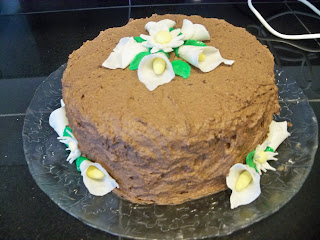 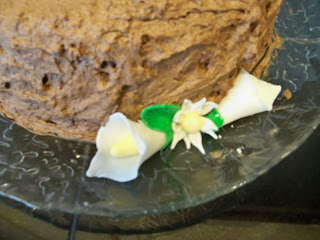 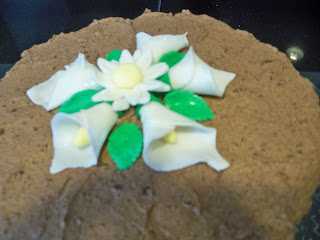 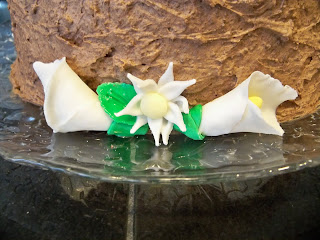 I have yet to receive an order that required me to make sugar flowers-- but I assume it's only a matter of time. So for Mother's Day at my sister in law's, I made a chocolate./chocolate cake with calla lilies. They were really fun to make. It gives me a greater respect for those who make edible flowers, as it really is an art. I look forward to delving into this area more.
Posted by Melinda B. at 12:30 PM No comments:

My first official Audition! Hopefully not my last! 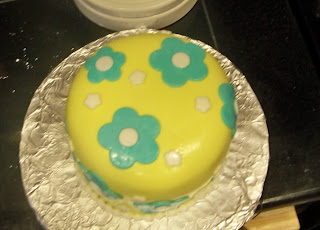 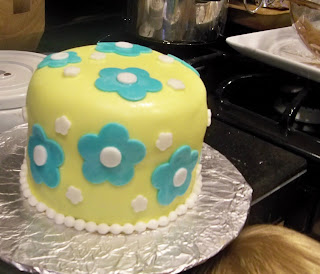 I had a cake testing for 2 mother of the bride's. The day was a complete disaster. I can't even begin to tell you how many things went wrong, but the highlights were 1- when my mixer stopped working half way through making the chocolate ganache, losing an hour's time and ruining the texture and stiffness of the filling 2- realizing I didn't have the address to the appointment as I was going out the door- only to realize my phone didn't have any reception. I just started driving and then pulled over and called again. I was 15 minutes late to the appointment. and best of all #3 driving and watching cake #2-- not pictured-- slide in half, dividing at the filling in the middle and most of the filling ending up on the floor of my van.
When I arrived- late- I had this Daisy cake-- made in record time- and not to the best of my ability and what I might call the Wrecktastic Strawberry Cake.
Then when I cut in the chocolate cake my heart sank because I could see it didn't settle correctly. And when I cut the strawberry mess, most of the filling was gone, so the proportions were completely off.
I was so completely embarrassed, I just wanted to hang up my apron and go home and cry.
I am a bit of a go- getter. I like to be great. I don't like to fail. This was a very hard day for me.
Both potential clients were more than gracious. So kind. So forgiving.
I will be making a wedding cake for one in less than 2 weeks. The colors of the fondant cake were test colors. The yellow will be darker and more golden. The turquoise will be deeper and richer. And it will not be daisies. I am really excited about this cake. And I am going to give it 200% and make it the best cake I have ever done. No pressure right?
Posted by Melinda B. at 12:20 PM No comments: